Rails on Vim (in English)

Update 2013: I’m not using the configuration described here. Go straight to YADR for a more modern set of dotfiles. 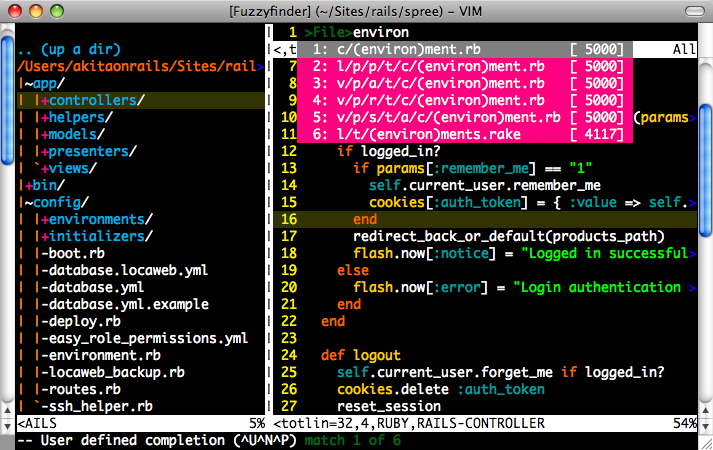 I’ve been thinking this through for a while about what are the best tools to develop Ruby and Rails project outside of the Mac. Specially on Windows. Netbeans and Eclipse Aptana are good choices and they are evolving fast, but I always thought of Java based IDE to be heavier than necessary.

I always say that you only need a good text editor and the terminal. But on Windows there is not that many competent editors such as Textmate. Even on the Mac, there are those who don’t want to pay for Textmate.

Railers have recently started to talk about Emacs, including Geoffrey who just released a great Peepcode screencast about it. Personally, I don’t feel like getting used to Emacs. It is just a personal taste thing, but I always preferred Vim.

On the other hand I never really stopped to configure Vim decently. So I spent a couple of days researching the Web, looking for the pieces to make Vim behave more like Textmate. At Github there are many configurations. I got one that I felt more complete and I did my own fork. I spent a day converting Textmate snippets to NERDSnippets in Vim, including the bundles for Ruby, Rails, Javascript, Rspec, jQuery. The end result is something very similar, though Textmate’s snippets engine is still ahead of NERDSnippets. Jamis Buck’s FuzzyFinder adaptation is also a great replacement for Textmate’s file navigator.

To install it on the Mac, you should not use the built-in Vim because it doesn’t come with the necessary Ruby bindings. Download MacVim. Then, in your ~/.bash_profile type in the following: